a Multi-Lingual, Multi-Talented Lady of Magic 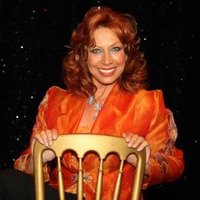 After working the Blackpool Convention with the family, she decided to branch out on her own. Now, with her boyfriend Hans, she does special presentations and firework magic. This year, she compered the Magic Night Club at the Magic Hands Convention in Sindelfingen, Germany, and she will be performing at the S.A.M. Convention in Boston this Juli.

Clients have included Nissan in Amsterdam, working in Den Haag for the Dutch governement ans a special trip to Poland, for which a private a private plane was provided. for a compagny who was entertaining a group of wealthy Arabs.

Sylvia Schuyer, who lives in Rotterdam is an international performer. Not only does she perform all over the world but she usually speaks the language of the country as well for she is an accomplished linguist.

Her father, Eddy was a busy magician, and her mother Jacqueline was a mannequin, dancer and singer. She has two younger brothers and one sister but they "lead normal lives". In Sylvia's early days she spent 18 years travelling all over Europe, wherever her theatrical parents went she was sure to go. One day something happend that was to change her life. It was when her parents were performing in a prestigious Cabaret in Nuremberg, Germany. The boss og the Cabaret said "Why are your two beautiful daughters not in your show?" Father Eddy replieds "if you sign us up for next year again they will be in the show (thinking there would be plenty of time to rehearse). The boss said "I want them in the show next week". So "Jacqueline, Eddy & Compagny" was born. Travelling across Europe with car and trailer they did four shows a day and on one day they had nineteen shows. That must be a record.

Sylvia speaks several languages which enables her to perform a patter act in many different countries and to act as interpreter at numerous conventions worldwide. Her father Eddy taught her all she knows about magic, and to add to het expertise in stagecraft she took cources in juggling, tapdancing, classic ballet and jazz.

At a magic convention at the Casino Municipal in Nice, Cote d' Azur, France, she was acclaimed "Miss Magic". Then came her change to put over her unique act "Magic Under Water" on German Television doing magic surrounded by little fishes and turtles.

Her experience shows that magic is a truly versatile form of entertainment for you can do it anywhere. She herself has proved this to be so for in addition to working in restaurants, theatres and other buildings she has also entertained on a train ans on a coach taking a party of people from Hamsburg to Berlin. She frequently travels the oceans on cruiseships, and every year comperes the International Circus in Rotterdam AHOY in the Netherlands.

"it is interesting, "she says "to see how people from different countries react. The German gives you respect, the Frenchman is very enthusiastic, the Italian is full of admiration, and the Dutch ask how did you do that?"

She also does charuty work and she says "When you work for little children with cancer and you see that smile on their faces then you can truly say "my magic is magical".

Her father Eddy, who is sadly no longer among us, tells her " stay with magic Sylvia because with magic you can stay young for ever" and that's food for all of us.

"If you can say 'my work is my hobby' then you will never have to work again.

Sylvia has been a ringmaster at the Christmas Circus Rotterdam Ahoy for many years.

She is mind blowing! and hugely underrated!

She has charm, she has skill. And she sure has magic! 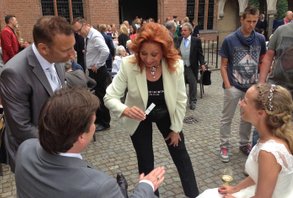 Sylvia can really sell a trick. An excellent magician in her own right. 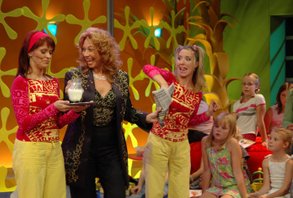 So charming! The goddess of magic tricks

Sylvia was the charming magician at our party 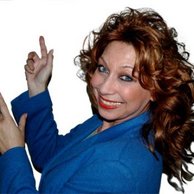